In the United Kingdom  every household (with a few exceptions) is forced to pay a license fee of £147 (2017) whether they ever watch the BBC or not.

The BBC is notorious for its pro gay and pro paedophile reporting, and its support for multiculturalism (AKA the Kalergi Plan).  The BBC also spent decades covering up muslim “grooming gangs” raping, drugging and pimping out up to one million White girls in Britain. 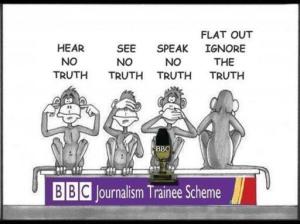 The BBC is only granted its Charter to extort £147 every year from most households in the United Kingdom on the basis of it being politically impartial. This Charter then gives the BBC the right to extort £147 from virtually every household in the UK, and to have houses searched for TV equipment by Capita agents. 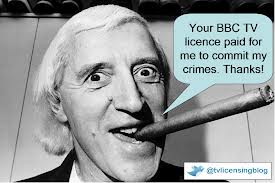 Any protest about the BBC’s involvement in paedophile rings and political corruption is usually met with extreme force and violence.

On 10th October 2103 a Freedom Of Information Act request was sent to the BBC asking “Does the BBC have a policy of promoting multiculturalism?”  The BBC reply is here:

Thank you for your request under the Freedom of Information Act 2000 (the Act) received on 10
October, seeking the following information:

Does the BBC have a policy of promoting multiculturalism?

The BBC does not have a policy on promoting multiculturalism.  Impartiality is one of the BBC’s core
editorial values which are set out in the Royal Charter which establishes its constitution and sets out its
main obligations.  The BBC’s Editorial Guidelines state that: “We wil  apply due impartiality to all our subject
matter and wil  reflect a breadth and diversity of opinion across our output as a whole, over an appropriate period,
so that no significant strand of thought is knowingly unreflected or under-represented” and that “our output is
forbidden from expressing the opinion of the BBC on current affairs or matters of public policy.”  This would apply
to any public discourse on multiculturalism as a public policy debate.
http://www.bbc.co.uk/editorialguidelines/

However, the Charter does require the BBC to promote six public purposes through its main activities
such as its programming. One of the public purposes is Representing the Nations, Regions and Communities.
The BBC Trust Purpose Remit document states that this means that “The BBC should ‘promote awareness of
different cultures and alternative viewpoints, through content that reflects the lives of different people and different
communities within the UK”. http://www.bbc.co.uk/bbctrust/governance/tools_we_use/public_purposes.html

To assist the BBC to meet this purpose, the BBC’s Diversity Strategy includes a strategic equality and
diversity objective to “Deliver high quality programming which reflects modern Britain accurately and
authentically” and this objective would be inclusive of reflecting ethnic and religious diversity on air. The
strategy also details other aspects of the BBC’s approach to diversity across the corporation’s activity to
ensure not just its programming but that its people, its approach to its audience and its strategy for the
future are all consciously addressing further diversity. You can find out more about the BBC and diversity
at: http://www.bbc.co.uk/diversity/strategy/documents.html

The link for this Freedom Of Information Act request is here: 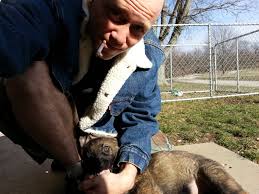 Andrew Anglin with his pet dog.

David Rosenberg, a Jew writer at Slate Magazine, has written a glowing review of a boy’s camp designed to brainwash pre-pubescent children into the homosexual lifestyle, and the sickening woman who takes homo-pedophilic pictures of it.

From the article, entitled “A Boys’ Camp to Redefine Gender”:

Over the past three years, photographer Lindsay Morris has been documenting a four-day camp for gender nonconforming boys and their parents.

The camp, “You Are You” (the name has been changed to protect the privacy of the children and is also the name of Morris’ series), is for “Parents who don’t have a gender-confirming 3-year-old who wants to wear high heels and prefers to go down the pink aisle in K-Mart and not that nasty dark boys’ aisle,” Morris said with a laugh.

It is also a place for both parents and children to feel protected in an environment that encourages free expression.

“[The kids] don’t have to look over their shoulders, and they can let down their guard. Those are four days when none of that matters, and they are surrounded by family members who support them,” Morris said.

Morris has stated that her photographic goal for the project is “to represent the spirit of these boys as they shine.” Some of the ways in which the kids shine is through the talent and fashion shows at camp that are popular and for which the campers come well-prepared.

“Some practice for the talent show all year, and others create their own gowns with their mothers or friends of the family,” Morris said. “The focus and enthusiasm is really pretty incredible. Also, it can be very emotional for the parents, especially the families who are new to camp and are experiencing this kind of group acceptance for the very first time.”

Who but a Jew could praise such a thing as this, in these terms?

As pre-pubescent children are not yet experiencing sexual desires, there is simply no way that they could be “choosing” to be transgendered homosexuals.  If they truly are expressing transgenderism – a psychotic mental illness – they need to be treated medically.  Almost always, this would be a result of sexual abuse, and as the parents sending their children to this camp are encouraging and endorsing the idea of turning their boys into lunatic wrecks – broken down shadows of human beings – it is most likely they that are responsible for the sexual abuse.  Purposefully destroying a child in this way – utterly crushing their souls – is the worst possible form of child abuse I can imagine.

The pictures that this Morris person ( a Jew) took of these kids show that they are being purposefully sexualized, in the way that they do to little girls at these JonBenét Ramsey-style pedo-pageants, proving that the whole thing is entirely pedophilic in nature.

I just can’t hardly even take it anymore.  How could anything be more vile than this?  Where is the outrage?  How can you look at this images, and not feel a deeply-rooted, primal drive to annihilate the satanic creatures who are doing this to our people?  To give your life, to give everything you have, fighting for that miniscule piece that remains of who we once were?

When is enough going to be enough, White Man?

The Jews are trying their very hardest to maximize the number of homosexuals in our society, in order to break down the social fabric to an even greater extent than they already have.  Their plan is to leave you with absolutely nothing of what your ancestors gave you, White Man, and you are letting them take all of it.

The Jews already have you. This is what they are going to do to our children.  There is no more future, there isn’t anything left to be afraid of – it is now or never, White Man.

May God have mercy on us all.