ARE WHITE BRITAINS TREATED AS SECOND CLASS IN THEIR OWN COUNTRY?

Are white British people, the indigenous people of Britain, treated with the same consideration, respect, care and concern as other people are ………..…as immigrants are?

Mass immigration has brought much suffering and harm to the indigenous people of Britain(1), including: the increases in many types of crime, such as the many thousands of rapes, many victims merely children; the importation of diseases; the lowering of wages and working conditions for the non-wealthy; reductions in freedoms; inhibition of indigenous culture; the shortages of and strains on resources, including housing; financial burdens in taxes; race riots; the strife and stress that diversity brings, including the reductions in fraternity, security and social capital; etc. Without immigration, the people of this country would not suffer these problems that immigration has brought(2). Indigenous people have suffered for the gain of immigrants…so one group loses for another group to gain… ‘equality’ anyone? 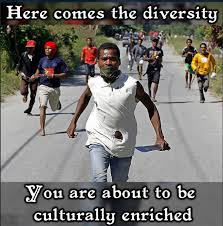 On a fundamental level, immigrants want to come and most indigenous people do not want them to – one group’s preferences are put above those of a less important group (the ‘second class’/’inferior’ indigenous group). If an immigrant wants a better life, then indigenous people are to have a worse life to facilitate this. Some suggest limiting your birth rates to accommodate immigrants (3), but their wanting to move to your country is not to be limited, oh no. Immigration has caused areas of the country to be largely occupied by immigrant groups – the government has effectively given parts of the land away without the consent of the indigenous people. White Brits are now the minority in London(4). Your land was given away, theirs was not. Not very ‘equal’. Perhaps less easily remedied, there is the threat of genocide to the indigenous people(5). Territory and existence are fundamental to a group, and both are threatened by immigration. These threats and realities cause stress and concern amongst indigenous people, but not amongst immigrants (since they are not losing anything in this respect). 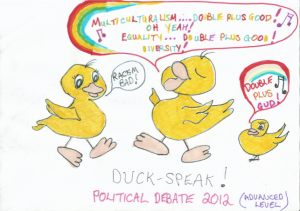 Indigenous people are also treated as second class in other ways. Can you object to immigration? Immigrants can object to anything you do, but can you really object to them being here? Not always easy without some potential loss to yourself. This loss in freedom of speech(7) again is not applied equally, and even if it were, it is only the indigenous people who would wish to exercise it. Various means are used to silence dissent, of course the nebulous-power-word ‘racism’(8) is thrown around, but also certain legal, social, financial and professional consequences can ensue if one dares to object – and they are going to make the grip on free speech even tighter yet(9) (if they can get away with it).

And how does the legal system treat you? We frequently hear that blacks are picked on by the police, (e.g. with more stop and searches than whites); but is this proportionate to the amount of crime they commit? Are men ‘picked on’ by the police by being stopped for rapes at a higher rate than women are? If crime rates differ, then police action rates also should reflect this were the police to be acting ‘equally’ in this respect. Where there is a glaring inequality before the law is in relation to the manner in which the legal system bends over backwards not to ‘offend’ immigrants, this at the expense of the indigenous white Brits. For example, the mass child rape and abuse noted in Rotherham was allowed to continue for decades(10). Would the legal system have allowed thousands of little black or Asian girls to be raped and abused by white men for decades(11)? And the police response time?…well, 16 years and still waiting…And the ‘racial equality’ laws, well, again, not really applied in an equal manner. For example, a pack attack on a white woman by immigrants shouting ‘kill the white slag’ is not considered as a racial(12)…imagine the other way round…well, imagine it, but don’t speak of it cause that might cause offence….and nobody wants to be called ‘racist’, or arrested(13).

And the media, all heard of Stephen Lawrence? Of course you have, the government (= the working man and woman paying taxes) has spent untold fortunes in relation to this case, and even changed the law so that defendants can be tried again(14) if acquitted (double jeopardy). Another fundamental protection removed to please immigrants (and, inter alia, to suppress and oppress indigenous people). But what about the little girl murdered on the bus by a black man while she was on her way to school? Vaguely remember the case? But can you remember her name(15)? What about a black man raping many elderly people in their own homes? Know his name(16)? Or any black cannibals in recent times(17)? Got any names? Has Kriss Donald’s(18) family been lavished with awards and money by the government? Any award ceremonies being held in his name(19)? Does the media frequently mention his name? Or any white victims’ names? When a little white girl as tortured and repeatedly raped and then taken to be shot dead, the media description on the day of the then wanted suspects omitted their race, but managed to broadcast that the car was ‘maroon’ in colour(20). Do you know her name? Does the media make all victims’ and perpetrators’ names equally salient to the public? Or are indigenous people not shown the same concern as are immigrants? The media go to great lengths to conceal the level of crime committed by immigrants(21), and to mislead the public into believing that ‘whitey’ is the bad one(22). Immigration is to be portrayed as beneficial to the country, and immigrants as victims of bad whites. This misrepresentation of the truth is admitted to by various journalists(23), and such behaviour is actually found in various guidelines to journalists, e.g. that in relation to immigrants, journalists are told to ‘find positive stories’ (National Union of Journalists, NUJ, Guidelines). Mass deception(24), and since this gives preferential and unfairly favourable treatment to immigrants and thus lower concern to white Brits, then this is not treating white Brits with the same respect/concern as other groups are treated(25). Not to mention the media coverage of any political party that dares to object to immigration…

Often it is claimed that more immigrants should have certain jobs or educational places, etc. This might be labelled as affirmative action, ‘equality and diversity’(26) or suchlike(27), but if some groups are to be given the jobs/places, then this can only be at the expense of other people. To call this ‘equality’ is untrue: this is blatantly unequal and treats one group (white Brits) as second class. If you are not given the job because you are a white Brit, then you have been treated as lesser. And for a non-indigenous person to be given the favourable treatment, this can only mean unfavourable treatment to the white Brit. Can’t have one without the other.

Perhaps you are offended that you are being treated as a second class person in your own country, but the very idea of offence is not applied equally to you either. White Brits must be very careful not to offend the immigrants(28). However, if you are offended by their presence and/or by any of their behaviours, or even by the very fact that you are not considered as equal of respect as they are, then you better keep quiet about it. White Brits being offended does not count in the same way, and can cause problems for those who express it. Offence only really counts if it is immigrants offended ..is this not an offensive fact? SShhhhhhhhhh…you mustn’t cause offence to the more important people. Their being offended is more important than your existence.

So, second class might not be strong enough, perhaps third or fourth, but remember not to complain about immigration. While you sit in a choked traffic jam from your cramped over-priced home on your way to work at a job under your immigrant affirmative-action-boss, working to pay high taxes to help support the immigration, remember that the stresses under which you live, the lack of freedoms, the crime, the occupation of your country, the genocide…remember that even if you feel offended by any of this, keep quiet and don’t say anything that might offend the masters. How low are you that you can’t even express dissent? Maybe not even fourth…

50 thoughts on “Are White Britains Treated As Second Class In Their Own Country?”