BNP “Stop Paedophile Rings” banner hangs between two commercial signs above the East Lancashire Road in Greater Manchester.The banners are secured with professional attachments before being swung over to the outside.

The banner was warmly supported by the majority of the public with only a few obscene hand gestures by multiculturalists. At around  8:45 AM a Police Officer approached the demonstration. The Police Officer ( Collar Number 14953 ) was friendly enough but had been ordered by his Inspector to take the banner down, then confiscate it and take one demonstrator’s name and details under Section 5 Public Order Act. We’re not sure about his understanding of the legal position here regarding Electoral Law and the Public Order Act.

How offensive is a “Stop Paedophile Rings” banner? What sort of person would be offended enough to telephone the Police?

The confiscation of this banner led to the cancellation of a planned “Stop Paedophile Rings” demonstration outside Manchester Town Hall against Labour Party paedophile rings. Whether this was deliberate or coincidental is impossible to say.

The same banner at a previous banner drop flash demonstration in Tameside. 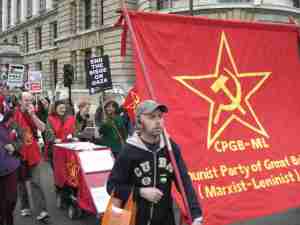 The BNP’s banner was confiscated for opposing paedophile rings but what if you complained that you are offended by this celebration of communism and genocide in Manchester?

These “Stop Paedohile Rings” campaign banners have been well received by tens of thousands of members of the Greater Manchester public. The banners are very good for bridge drop flash demonstrations, or for hanging or holding at other demonstrations. Each banner should also last several years/elections if looked after.

(1)A person is guilty of an offence if he—

(b)displays any writing, sign or other visible representation which is threatening, abusive or insulting,within the hearing or sight of a person likely to be caused harassment, alarm or distress thereby.

(2)An offence under this section may be committed in a public or a private place, except that no offence is committed where the words or behaviour are used, or the writing, sign or other visible representation is displayed, by a person inside a dwelling and the other person is also inside that or another dwelling.

(3)It is a defence for the accused to prove—

(a)that he had no reason to believe that there was any person within hearing or sight who was likely to be caused harassment, alarm or distress, or

(b)that he was inside a dwelling and had no reason to believe that the words or behaviour used, or the writing, sign or other visible representation displayed, would be heard or seen by a person outside that or any other dwelling, or

(c)that his conduct was reasonable.

(4)A constable may arrest a person without warrant if—

(a)he engages in offensive conduct which a constable warns him to stop, and

(b)he engages in further offensive conduct immediately or shortly after the warning.

(5)In subsection (4) “offensive conduct” means conduct the constable reasonably suspects to constitute an offence under this section, and the conduct mentioned in paragraph (a) and the further conduct need not be of the same nature.

(6)A person guilty of an offence under this section is liable on summary conviction to a fine not exceeding level 3 on the standard scale.

On April 10th 2014, Gary Tumulty (North West Regional Organiser) went to Swinton Police Station to demand the return of the “Stop Paedophile Rings” banner. Here is the video of what happened: