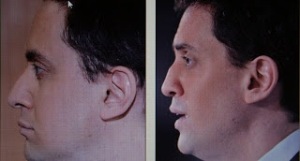 Ed Miliband gets a new profile.

Politicians will do anything to get elected or re-elected. This is particularly true of Labour opposition leader Ed Miliband. When he was chosen leader of his party in 2010, he benefited from the fact that everybody was trying not to elect his better known brother, David, to the position. The next step to power, however, requires persuading a large proportion of the British public to vote for him.

With the country going through economic discomfort and serious budget cuts, the opposition leader, whoever he is, should be soaring in the opinion polls. Strangely, however, Mr. Miliband has failed to catch fire with voters. Even when they express a preference for Labour, they still see its leader as a drag.

This poor performance has raised eyebrows and called forth a welter of explanations, which see the problem as either a lack of energy, ideas, direction, or whatever. Others have commented on his voice and demeanour, and there has even been a bizarre story that the problem is he does not understand the natural human desire to have a conservatory added to one’s house.

This is a revealing pattern. Whenever one notices a proliferation of explanations that don’t quite hit the mark, one can be sure that there is a real explanation for the phenomenon that people simply don’t feel comfortable talking about. In today’s enriched multicultural Britain, one wonders what this can be. No doubt we would have been scratching our heads on this one till doomsday if Mr. Miliband had not unwittingly pointed to it himself through some pretty drastic nose surgery: Yes, it seems the British voter is not 100% happy about voting for a jew with a big nose.

Recent pictures of Miliband taken in profile show that he now has a completely different nose than he did last year.

Just like the strange ‘autumn years’ marriage of Gordon Brown when he was Chancellor of the Exchequer and gunning to become Prime Minister, we can safely conclude that this radical transformation was undertaken because he sees it as a vote winner and a necessary cross to bear in pursuit of the ultimate goal.

Because a politician having plastic surgery to win votes lacks the desired ring of integrity, Miliband has had to find a plausible medical cover for his cosmetic makeover. According to awkwardly jokey press releases and speeches, it is supposedly because of a deviated nasal septum, the kind of condition, the mere mention of which is enough to deflect further enquiry while eliciting a sympathetic shrug from the medically illiterate masses.

It is however immensely interesting that correcting the position of something whose function is to internally separate the left and right nasal passages should, as a curious side effect, also alter someone’s profile to such an extent. Likewise it is odd bordering on quaint that this medical condition only became serious enough to warrant an operation after Miliband gained the leadership of the Labour Party.

What it boils down to is that Miliband views himself as very much a jewish-looking jew, and that, in the absence of the kind of compensating advantages that Britain’s first and only jewish PM Benjamin Disraeli had, he expects this to count against him with the voters. It’s not even necessary for the mass of voters to identify him as specifically jewish. They just see him on the TV and conclude at some gut level that he’s not one of them and resistance sets in. By changing his ‘ethnic profile’ in this way he is effectively denouncing the British electorate as a bunch of racists.

Unlike Obama in America he can’t latch onto White guilt or the White fantasy of making the poor little African boy’s dream come true. Miliband is not exotic enough for that. As a jew, his best bet is in trying to seem as White and British as possible, so suddenly his septum deviates and a few months later he’s a jew who has circumcised another portion of his anatomy.

Perhaps now, with his less noticeably Jewish nose, critics will mysteriously start to discern energy, ideas, and direction in his leadership that was not there before. But before this happens, I suspect that he might have to discover a whole host of new medical complaints so that the vote-winning cosmetic surgery can continue indefinitely.

It should also be noted that Ed Miliband has claimed he is no longer a jew, despite naming his adopted sons Isaac and Jacob and holding regular meetings with Rabbi Sachs.