When today even the EU’s leading economic officials Manuel Barroso and Olli Rehn are openly urging growth policies rather than further retrenchment, the game’s surely up. But before he takes a very deep breath, it’s worth bearing in mind that a £40bn programme of infrastructure works and housebuilding could be generated at no cost to the exchequer at all.

The untapped source for this funding would come from taxation of the seriously rich. This group can be variously defined as stretching from the top 0.003% of the population (the richest thousand persons) to the top 10%. Whichever category is used, the wealth of the ultra-rich is far, far greater than most people realise – which may explain why it is never discussed in this era of austerity.

British workers pay has dropped for the last 30 years.

According to the annual Sunday Times Rich List, the richest 1,000 persons now sit atop of £414bn, a sum more than three times the size of the entire UK budget deficit. The richest 1% of the population, about 300,000 persons with an income of more than £3,000 a week, are estimated to possess wealth of about £1tn. The richest 10% control wealth of about £4tn. To put these figures in perspective, Britain’s total GDP is £1.45tn.

Consider first that minuscule group in the stratosphere at the top, Britain’s thousand richest. In 1997 they held assets of £99bn, but they took full advantage of New Labour’s being “intensely relaxed about people becoming filthy rich” to nearly quadruple this to £336bn by 2010. That process of gargantuan enrichment now means that in order to get access to this exclusive club, one needs personally to command assets of at least £450m to get into the top 200, £750m to get into the richest 100, and no less than £1.4bn to break into the top 50. 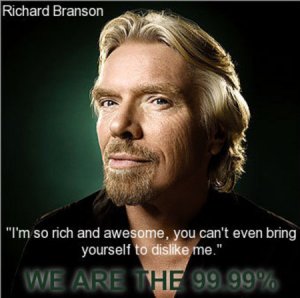 It’s not only that the very rich have colossal wealth, they also overwhelmingly monopolise it. The richest 1% of the population own a quarter of total UK wealth, and the richest half control no less than 94% of total wealth. Ownership of land is even more skewed: 69% of it is owned by 0.3% of the population.

Yet in the absence of a wealth tax, a mansions tax, a land value tax, or a supertax on excess gains, the super-rich are being required to make hardly any contribution at all to deficit reduction, even though many of them were directly involved in causing the financial crash in the first place. That is even more remarkable when there has been a real terms 6% drop in the income of the population as a whole since the 2008 collapse, yet over the same period the gains of the richest 1,000 persons escalated by no less than £155bn, considerably more than the current total UK deficit.

People have starved to death in Britain.

The most recent incomes data shows this trend is continuing or even growing. Data published in January showed that the bottom tenth of earners got a 0.1% rise in pay in the previous year (that is, they had to take a real terms pay cut of nearly 4%) while over the same period the rise for the top FTSE 100 directors was 49%, nearly 500 times greater. The average annual pay of FTSE 100 chief executives is now about £4.5m, which works out at £84,615 a week. This compares with their low-paid workers on about £240 a week, a ratio of 352:1.

Even this is not the whole story. The very rich also largely monopolise the system of tax reliefs. In the case of pensions, this amounts to £21bn a year, of which two thirds is concentrated on the top 10% of the population. Equally, tax avoidance and evasion is very much the perk of the extremely rich, who command the armies of accountants and lawyers in order to organise it on an industrial scale, which is reckoned to cost the taxpayer £25bn a year.

What, then, should be done? In the short term, the most feasible approach is to impose a capital gains tax charge at the current rate of 28% on the topmost layers of wealth, the £155bn gains amassed by the 0.003% over the last three years. That would yield £43bn, more than enough to generate the public investment to create 1.5 million jobs over the next two years. This could then steadily be extended to the remainder of the top 1%, which would provide the funds to widen and deepen the early recovery.

A wealth tax and land value tax, the details of which would have to be carefully drafted, should then follow in the medium term, and would achieve several purposes. They would resuscitate a public sector ravaged by the Tory ideological assault, curtail the grossest excesses of inequality that have disfigured the last three decades, and lay the foundations for an industrial and technological revival without which British living standards cannot be sustained. And all this without burdening the remaining 99% of the population.