In November 1997 the South London Press reported the finding of a sex dungeon complete with manacles , chains , bedding and a sleazy red light in Lambeth High-Security Police Head Quarters in South London. The civilian staff who leaked the story were suspended and Officers from Scotland Yard’s Criminal Investigation Bureau were called in.

Detective Chief Inspector Clive Driscoll ( who later went on to convict the Stephen Lawrence killers ) was put on the case and he soon started following up leads. However when his leads led him to politicians, including at least one who was a Lambeth Labour Councillor and is now an MP, he was taken off the case and put on disciplinary charges. 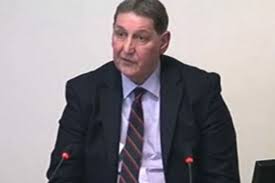 However before his removal DCI Clive Driscoll had discovered that all 25 of Lambeth’s Childrens’ Homes had been run by a large paedophile network for over 20 years.

Manacles similar to those found in Lambeth Police Station

When Councillor Anna Tapsell, who had campaigned against the sexual abuse of Children in Lambeth Care Homes and Police Stations for over twenty years, complained about Driscoll’s removal she was visited and “warned off” by a senior Police Officer.

Councillor Anna Tapsell was warned off by a senior Police Officer.

The Metropolitan Police set up a five year investigation, and as is usual in Britain three low level paedophiles got a couple of years in jail for minor sex offences. The major players all got clean away to continue their “activities“. 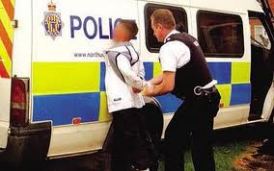 Police detain a youth – was he sexually abused or used for Child pornography at the Station?

The Police claimed there weren’t any links between the Lambeth and Islington paedophile rings, but I found some glaringly obvious ones within five minutes. Abraham Jacobs was convicted in 1986 for his part in a paedophile ring that specialised in picking up run away Children in Piccadily Circus to provide for the sexual abuse by BBC Executives and Labour Party Politicians. 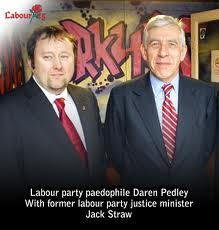 Abraham Jacobs had worked at both Islington and Lambeth Care Homes and was known to Margaret Hodge, Jack Straw and Ted Knight.

Another link is Michael John Carroll. He was one of the paedophile “fall guys” from the Lambeth Care Home Scandal – this is a quaint British tradition where small time paedophiles get convicted of minor sex offences and all enquiries are then closed in to the bigger picture.

Even though Carroll had been a relatively low paid Council Employee, on his release from prison he bought The Grade 2 Listed Hand Hotel on Church Street in Chirk ( just outside Wrexham ) for £725,000 cash. The Crest Hotel in Wrexham is usually linked to the Wrexham Child sex abuse scandal, but The Hand Hotel was also conveniently close to Wrexham.

Hand Hotel near Wrexham bought for £725,000 cash by Carroll following his release.

Another link is Jason Hoyte a convicted paedophile and Police informer. He had been warned off by Police from hanging round Islington Care Homes and had somehow avoided a CRB check and obtained a job as a Youth Worker with Lambeth Council. He was sacked in 2006 after being caught grooming Children for BBC Executives on a Council run Youth training scheme, he tried (and failed) to sue Lambeth Council for unfair dismissal. He was jailed in 2009 for 9 years for sex attacks on, and grooming of, young Children.

On January 31st 2011 a Police Constable from Lambeth Police Station, Jordan Janssen, was sentenced to a total of 12 months in prison at Southwark Crown Court, by Judge Debra Taylor, for making and distributing Child pornography. This was a result of an outside Police Force catching Janssen emailing Child pornography to a man in Scotland. It is not known how much of this Child pornography was made at Lambeth Police Headquarters. Janssen has refused to reveal the identity of other Police Officers involved.

Lambeth Police HQ – how many other British Police Stations have paedo sex dungeons?

Join the campaign by tweeting this article with #paedobritain at the end.

We found the following article on the  http://spotlightonabuse.wordpress.com blog on 18th August 2013:

The Metropolitan Police Service (MPS) have responded to a Freedom of Information request about the Lambeth Police Station ‘sex chamber’, first reported in a November 1997 article in the South London Press, and shared on Spotlight earlier this year. Original article

The FOI doesn’t provide much new information but confirms the accuracy of the South London Press story, i.e. there was a chamber (‘a small space’) underneath Lambeth Police Station , ‘certain items’ were found, and this prompted an investigation by Scotland Yard’s Criminal Investigations Bureau.

“IF ASKED: Approx two weeks ago, a CIB investigation began after certain
items were found in a small space at an MPS building in Lambeth.

The building is mainly used by civil support staff.

There is no suggestion that police officers are involved in this matter,
or that anyone was taken there under duress.

There is no evidence that any sexual activity actually took place at the
premises.

IF ASKED: Can confirm there are no police officers involved.”

“IF ASKED: There have been no suspensions icw this enquiry.

IF ASKED: There are no police officers based at Lambeth. The building is
entirely a base for civil staff departments.”

Please note that the abbreviation ‘icw’ means ‘in connection with’.

The searches at the DPS and Records Management Branch failed to locate
information relevant to your request. Please note that, owing to the time
that has elapsed since the investigation into this incident, any files
relevant to this case would have been destroyed in accordance with the MPS
disposal schedule. Disciplinary investigation files are destroyed 6 years
after the conclusion of the investigation.

The same person has now made another FOI request asking what items were found, and for details of the internal investigation.

Earlier this year the Mirror reported that the Metropolitan Police have reopened their investigation into a paedophile ring that operated in Lambeth Council children’s homes. DCI Clive Driscoll was removed from the original investigation and placed on a disciplinary after superiors learned that politicians, including an MP, were among the suspects. Full article

Five months on and there haven’t been any updates on the investigation.

With no progress on this case by the authorities this blog is now opening it’s own investigation. The first step to be taken is a Freedom of Information Act request with this website https://www.whatdotheyknow.com/ with Lambeth Council:

Please answer the question above so we know whether the recent response contains useful information.

Dear Lambeth Borough Council,
Please provide a list of all Lambeth Councillors for the last 40
years ( or as long as possible ) and Heads and Deputies of Lambeth
Council Departments.

Thank you for your request for information that was received on 24 August
2013 concerning Dear Lambeth Borough Council,
Please provide a list of all Lambeth Councillors for the last 40 years (
or as long as possible ) and Heads and Deputies of Lambeth Council
Departments.

We are dealing with your request under the Freedom of Information Act 2000
and we aim to send a response by 24 September 2013 (which is 20 working
days beginning on the first working day after the date we received your
request).

We will also advise you if we cannot provide you with the information
requested for any other reason together with the reason(s) why and details
of how you may appeal (if appropriate).

“This email (and/or attachment) may contain information that is legally
privileged.  If you have received this in error please notify the sender
immediately”