Co-written by Cigpapers and Watt Tyler: 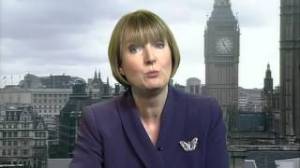 Jewess Harriet Ruth Harman MP QC (born 1950) She was the interim Leader of the Labour Party, and Leader of the Opposition, from 11 May to 25 September 2010. Harman is currently Deputy Leader for the Labour Party. After qualifying as a lawyer, Harriet Harman worked for Brent Law Centre in London. Her husband is Jack Dromey MP. She is the niece of Lord Longford who was the close friend of multiple child sex killer Myra Hindley.
Between 1978 and 1982, Harriet Harman was employed as the Legal Officer for the National Council for Civil Liberties which later became Liberty.
At the time the National Council for Civil Liberties was officially affiliated to two organisations, the Paedophile Information Exchange and the Paedophile Action for Liberation, whose members argued openly for the abolition of the age of consent.

When Harriet Harman first entered politics this matter was brought up, but a friendly media and other politicians accepted her claims that the NCCL no longer had any connection with P.I.E./P.A.L. when she was Legal Officer between 1978 and 1982 . However it later transpired that P.I.E./P.A.L.  had been officially affiliated with the NCCL until 1982, when Harman left and P.I.E./P.A.L. went underground.
She has since repeatedly veered between denying any connection with P.I.E. and P.A.L., and claiming that as a Legal Officer for the NCCL she had no choice in who she represented. Patricia Hewitt ex MP  was General Secretary of the National Council for Civil Liberties from 1974 to 1983.
As with a lot of liars Harman has different versions of events for different audiences.
Let’s look at the first lie that she was never connected or in contact with P.I.E. or P.A.L. in any way:
Documents now in the Public Domain show a NCCL letter signed by Harriet Harman objecting in the strongest terms to any laws against child pornography, unless it could be proved by the prosecution that the child was harmed. The NCCL also submitted a response to the Government arguing for lowering the age of consent and stating “ Childhood sexual experiences , willingly engaged in , with an adult result in no identifiable damage.” When the Government moved to crack down on child pornography , the NCCL’s response, again signed by Harriet Harman , claimed the new law could lead to “ absurd prosecutions and increased censorship”. As Legal Officer for the NCCL she also argued to abolish incest laws. Jack Dromey served on the NCCL Executive Committee from 1970 to 1979. There are allegations that Lord Longford was part of this lobbying but no documentary evidence has emerged yet.
So having nailed the lie that she was never involved in P.I.E. or P.A.L. let’s have a look at the lie that she had no choice but to represent paedophile groups as Legal Officer for NCCL. Well this is also obviously not true as visiting the NCCL/Liberty website will show that NCCL/Liberty state :
“ Liberty receives thousands of requests for legal advice and assistance each year. Because we’re a small organisation with limited resources, our lawyers are unable to take up all of these cases actively.”
So clearly NCCL/Liberty don’t have to take up every case they are approached with.
P.I.E. went underground in around 1982/3, but resurfaced in June 2012 mounting a demo in support of muslim paedophiles outside Liverpool Crown Court led by a Labour Party Councillor and Labour Party Activists.

Please note that the butterfly is the insignia of female paedophilia.
For more Labour Party paedophile scandals google “Labour25” . 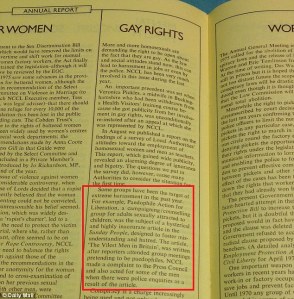 In recent days I have been the subject of a politically-motivated smear campaign by the Daily Mail.They have accused me of being an apologist for child sex abuse, of supporting a vile paedophile organisation, of having a relaxed attitude to paedophilia and of watering down child pornography laws. These are horrific allegations and I strongly deny them all of them.

1.  Allegation that I supported the lowering of the age of consent to 10:

This is not true.  I supported the equalisation of the age of consent (as set out in NCCL document “priorities and strategy for the executive committee June 1981″) by making the age of consent the same for homosexual as well as for heterosexual sex.

2. Allegation that I opposed the law on incest:

This is not true.  The document they refer to was written by NCCL in 1976 before I started to work there.

3. Allegation that I was seeking to water down a proposed ban on child pornography:

This is not true.  I supported the Protection of Children Bill 1978.  At the start of the document it makes clear that  “The NCCL deplores the exploitation of children whether in the form of use in commercial pornography or as victims of sexual assaults”

The submission argued for some amendments to guard against unintended consequences including:

–  The use of pictures in sex education being criminalised

–  We also proposed that the definition of indecent was too wide and instead proposed “obscene” as indecent was very broadly defined and could include Page 3 of the Sun.

The  Mail have tried to make me guilty by way guilt by association.

Members and affiliates decided the organisation’s policy at the AGM from year to year.

I was aware that because NCCL opposed censorship and supported gay rights, paedophiles had sought to exploit that and use NCCL as a vehicle to make their arguments.  But by the time I came to work for NCCL this vile organisation had already been vigorously challenged within the organisation. Jack Dromey was instrumental in that challenge when he took over the chair of NCCL in 1976

The reason I decided to go to work for NCCL was because I actively supported the work they had done and in particular the work of their women’s rights committee on the Equal Pay Act, on the introduction of the Sex Discrimination Act and for greater protection of victims of domestic violence and against race discrimination.

Since being elected to the House of Commons in 1982 and during my times in Ministerial Office I have always championed the rights of those subjected to sexual abuse – especially women and children.

I hope The Daily Mail will stop this campaign of smear and innuendo against me.  I have done nothing wrong and am guilty of none of their grotesque allegations. 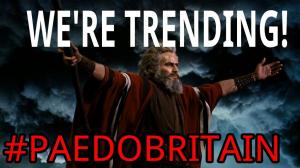 47 thoughts on “Harriet Harman of the Paedophile Information Exchange Wears a Butterfly Brooch.”